From August 28th till September 5th of the past season, ten little Fiat 500s and their drivers and passengers as well as a Mercedes Transporter carrying spare-parts went on a “Tour des Grandes Alpes”, a daring journey from the Lake of Geneva all the way to Nice. Their goal was to cross 18 passes within 9 days, but in the end it would turn out to be 19 passes instead, as Angelica Schlegel reports within her long long-awaited travelogue in the Annual Report of Fiat 500 IG Munich. 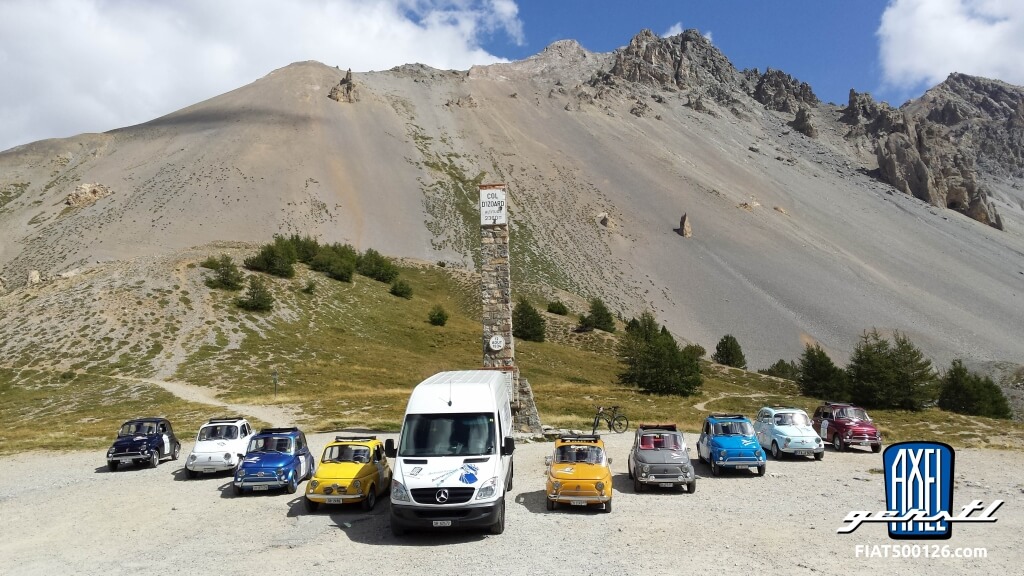 Nine of the vehicle owners originated from Switzerland, led by the journey planner Hans Fluri (Fiat 500 Club Switzerland) in his Fiat Abarth. Angie Schlegel and her 1962 Fiat 500 D took part representing the Fiat 500 IG Munich. Well ahead of her journey, she got in touch with Axel Gerstl, who was happy to provide spare-parts for the tour.

As early as the first meeting point at the Würenlos service station along the A1 headed towards Bern, it had become time to deal with the first breakdown. A flat tire had to be exchanged, which obviously posed no challenge for any resourceful grease monkey. What posed a larger problem however, was finding their bearings: despite having a roadbook with detailed information on the route, the group lost their way and ended up in Thonon-les-Bains. The subsequent U-turn by all ten Fiat 500s and the follow-up-vehicle on the narrow road turned out to be a challenge for all the drivers and vehicles. But a positive side-effect of the unexpected detour was the fact that an additional and unplanned mountain pass, the Col du Feu, also became part of the expedition. 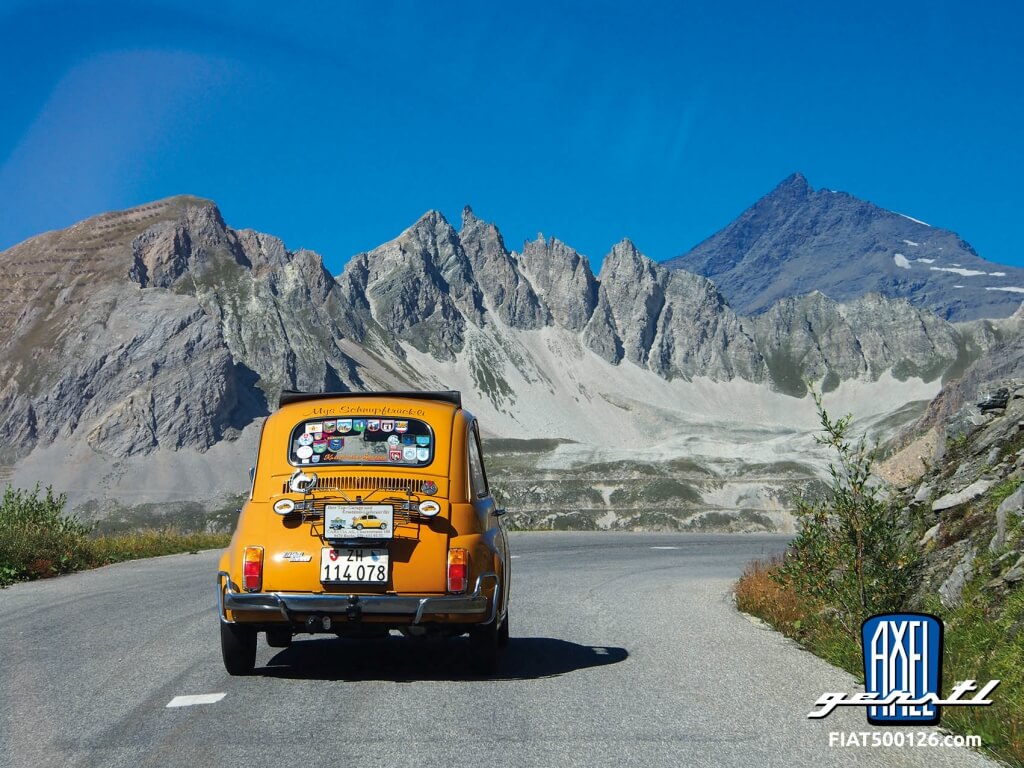 Back on the initially intended route, a feeling of satisfaction, joy and most certainly a little pride began setting in, after all, as it turned out that  the first four of the planned mountain passes were able to be crossed without any additional problems. The next day, the journey went on towards Col de Méraillet, where the group was able to enjoy the breath-taking panoramic view of the Barrage de Roselend Reservoir. After passing Cormet de Roselend, however, they were confronted with the next problematic situation, since Hans Fluri had to contend with some problems with his Abarth engine. The required repairs - thorough cleaning of almost all parts, replacing spark plugs and so on – were all undergone while on a small parking lot in Bourg-St-Maurice by Val d’Isère. 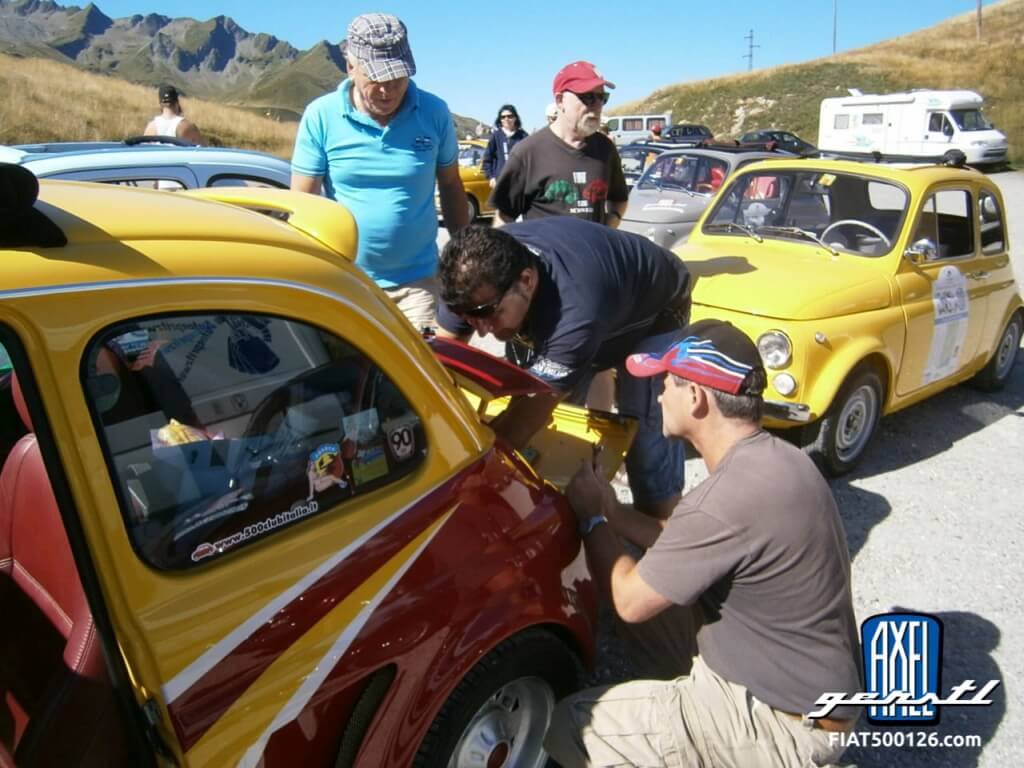 The next stage took the ten little Fiats to the highest road pass in Europe, crossing the Col de l’Iseran (2.764 meters or 9068 feet) and then on to Modane, were the next lot of repairs became necessary: Angie Schlegel’s carburettor needed to be retightened, the Abarth’s spark plugs cleaned, a fan-wheel fastened tightly and a generator replaced. And on the tour went across St-Michel-de-Maurienne towards Col du Télégraphe, a somewhat unspectacular waypoint along the way to Col du Galibier. Upon arriving, it had become time to celebrate: the first half of the tour had turned out a success. 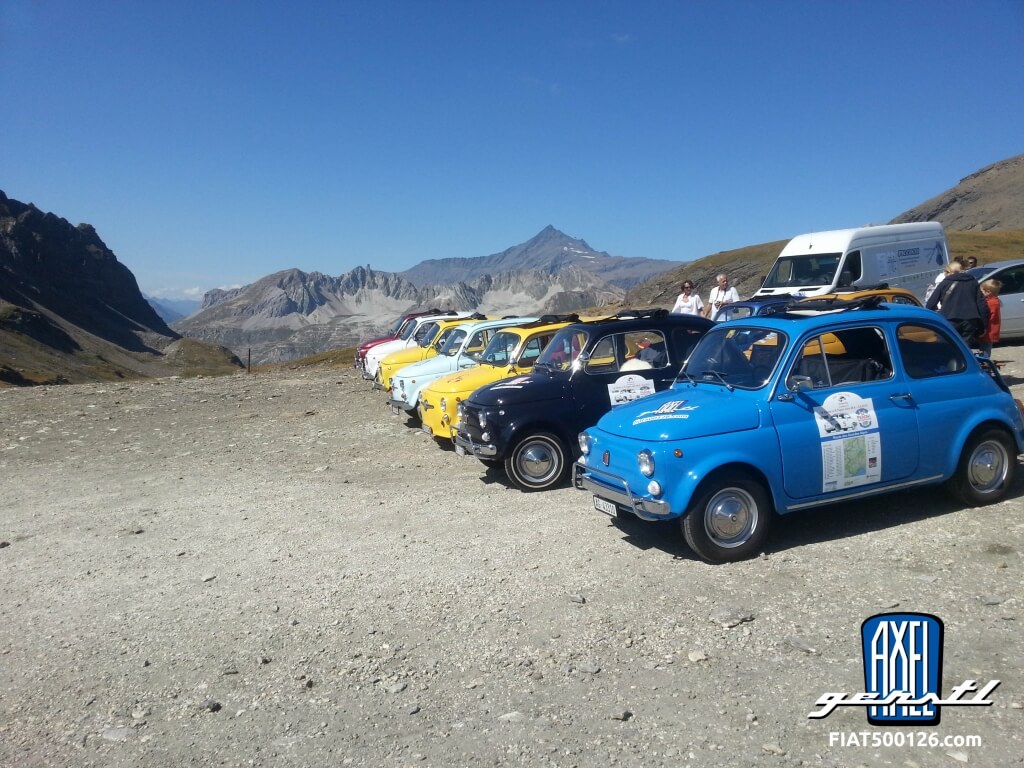 But unfortunately for Hans Fluri’s Abarth, the Col du Galibier was to be the final stage. When smoke had started rising from the engine compartment, it quickly became clear: the starter had blown. For this reason, on the way through Briancon to Guillestre, the Abarth was transported in the van. Since the damage proved to be beyond repair, it was decided to have it picked up by the TCE to make room in the “sweeper car” for future emergencies. Hans Fluri joined Angie Schlegel in her car, which promoted her Fiat 500 D to the lead vehicle. 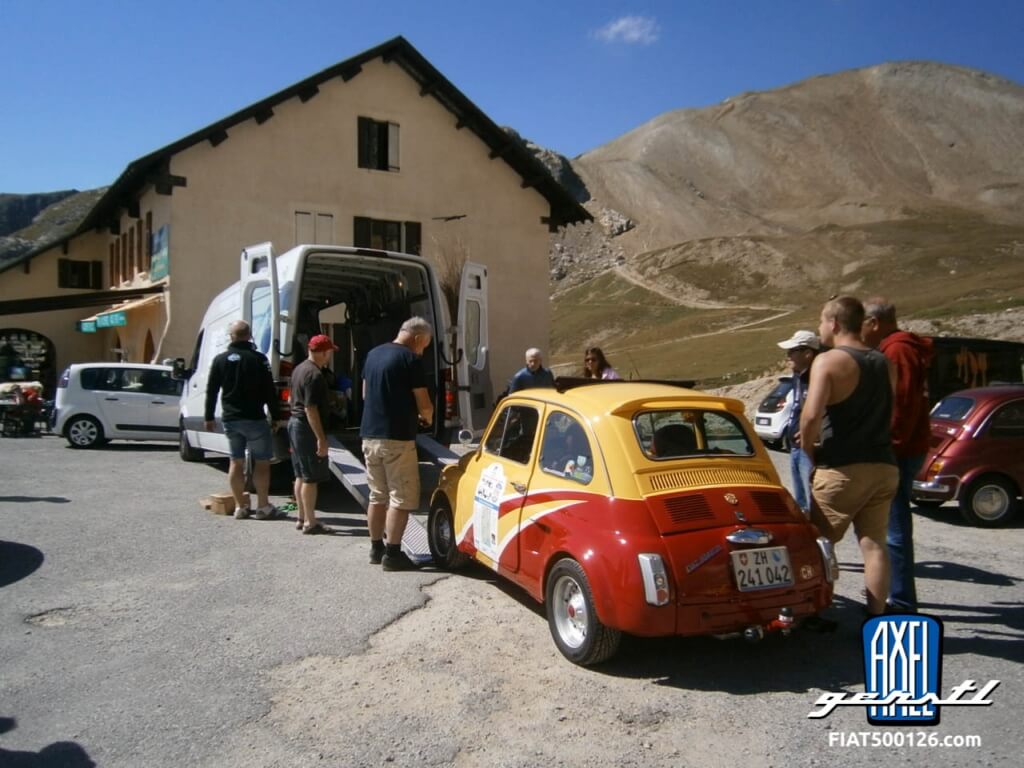 After passing Col de la Cayolle, which was one of the most stunning and vibrant passes of the tour, the journey went on past Valberg towards Nice. The goal was almost achieved, only four more passes remained between the Fiat 500 convoy and the chequered flag. 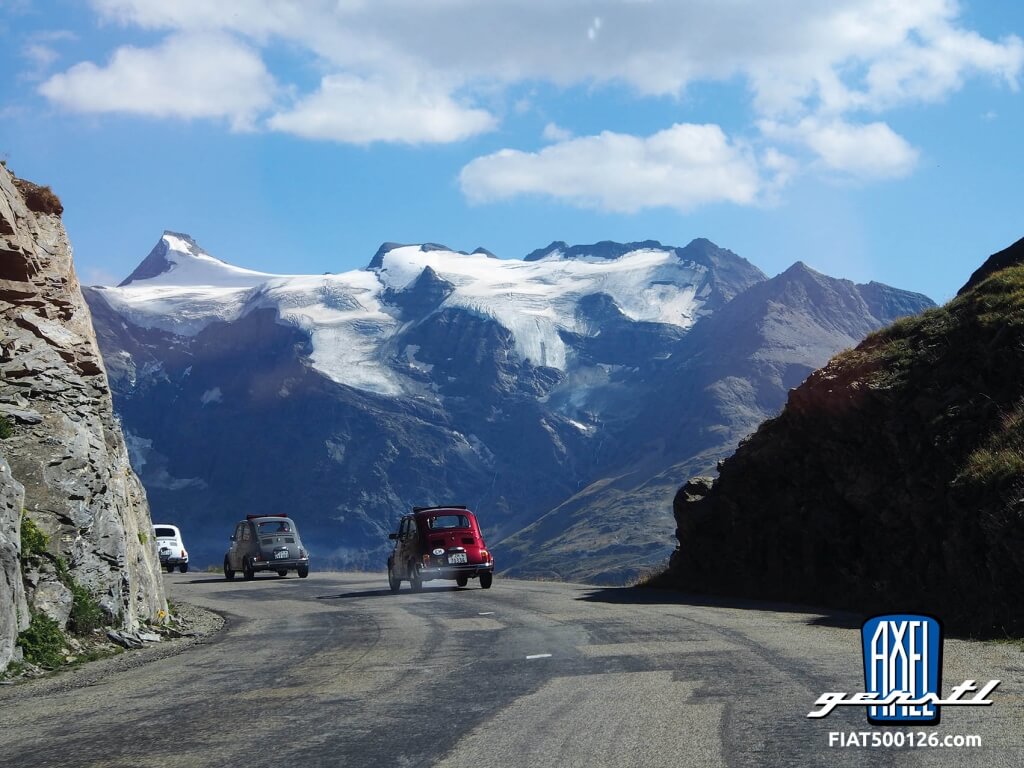 But regrettably, right before the final pass, another Fiat 500 was forced to yield, this time due to gearbox failure. On September 2nd, the group reached Nice - slightly decimated in numbers but on time – with eight small but running Fiat 500s as well as their little relative resting in the back of the “sweeper car”. 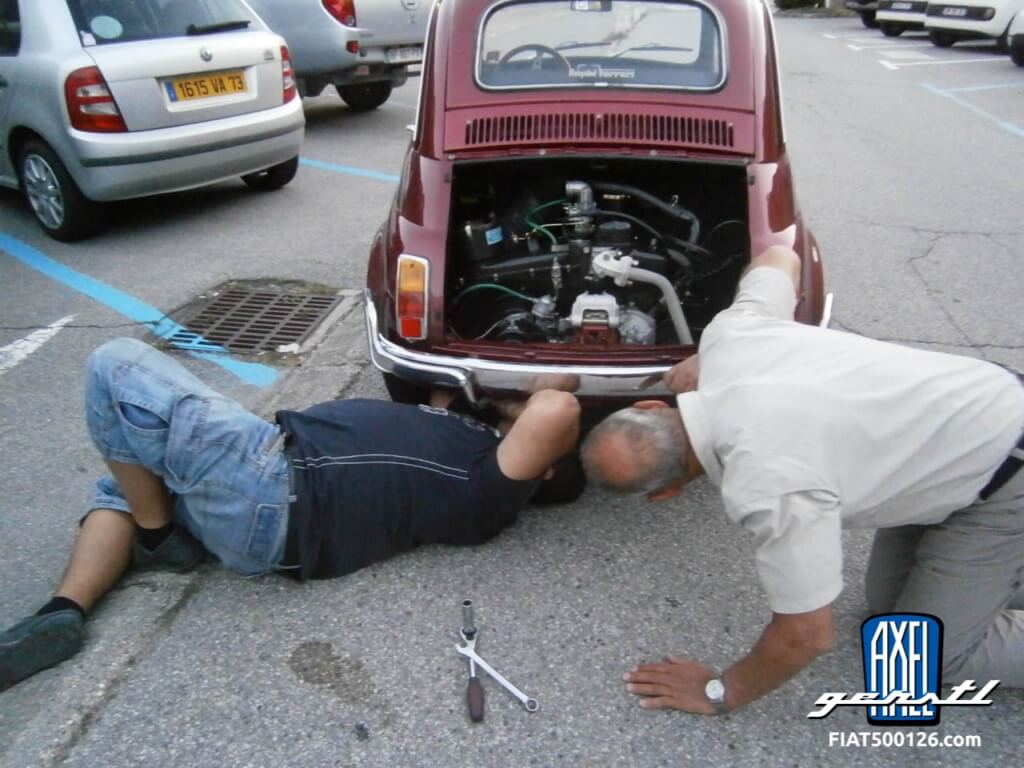 In total, the ten Fiat 500s experienced the following technical problems: a broken generator, a loose generator nut, a loose air-fan screw, four worn-out front tyres, some loose carburettor nuts, three flat tyres, a weak battery, a lose valve seat, a slightly loose carburettor, an edentulous transmission main shaft, a loose oil filler lid spring, a defective steering box, as well as broken tie rods. To make up for some of the trouble, it was possible to enjoy two more beautiful days in South France and enjoy some refreshing trips to Cannes and to Lago Maggiore, before finally saying goodbye on September 5th. 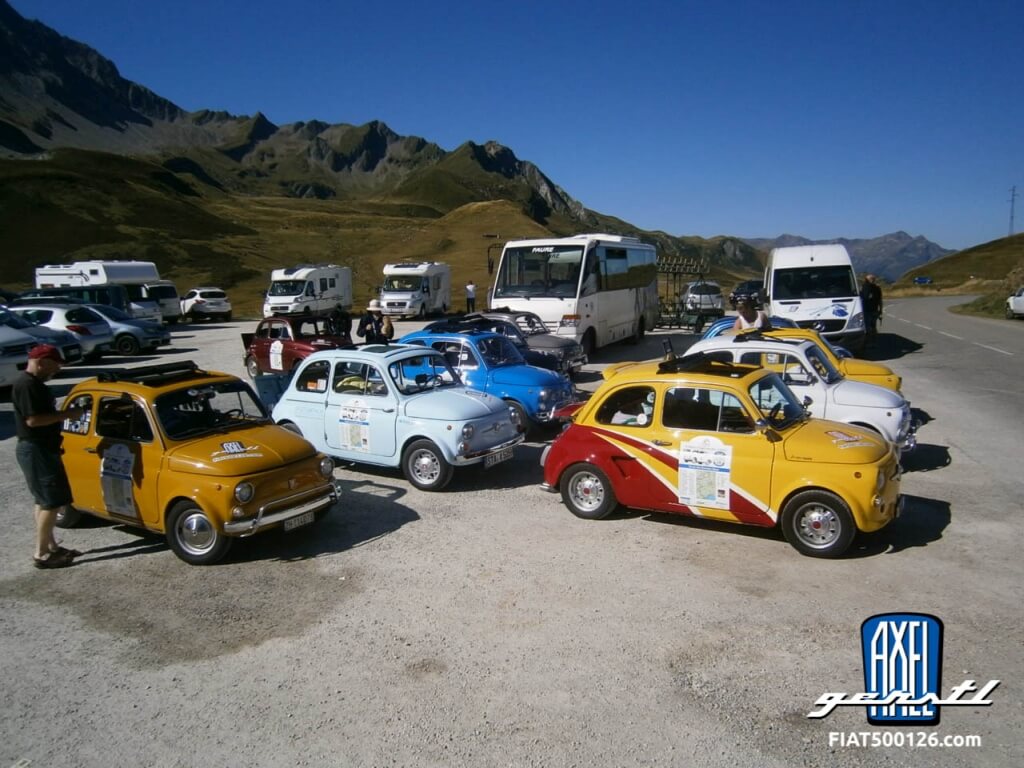