In May Tim Barritt started his tour from North Yorkshire/United Kingdom through the birthplace of the Fiat 500 in Turin to Venice with his Fiat 500 L (year of construction 1968), which he calls 'Custard'.

The Charity Drive with his Fiat 500 L had the aim to collect donations for the men of the Air Ambulance in the United Kingdom and in Italy. These donations are especially important for the flying ambulance because only one flight with the helicopter is quite expensive but saves lives in cases of bad accidents. 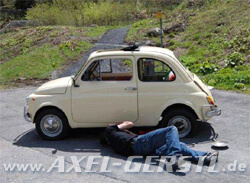 During his tour we supported Tim with spare parts he needed for his Fiat 500 and we hope that we were able to contribute to the success of his Charity Drive. His journey led him through England over the Channel Tunnel to Germany. On this distance the Fiat 500 had its first problems. Black Smoke forced the Briton to stop for the first time and do some maintenance. After that the 'Custard' recovered and the tour continued through Switzerland and over the St. Gotthard Pass to Italy. An impressive picture to see the snow piling up on both sides of the street even higher than the little Fiat 500! 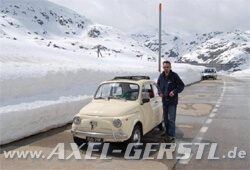 Another highlight of the tour was the stop in Turin. There Tim was allowed to drive on the famous test track, the Pista Lingotto, over the housetops of Turin with his Fiat 500 L. An amazing experience! 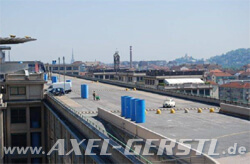 His tour ended in Venice after successfully covering a distance of 1200 miles for the good cause.