German-Italian friendship: The visit of the Fiat 500 Club Italia

At the 3rd august some members of the Fiat 500 Club Italia made a short visit in Biburg as they were heading to the North Cape with their Fiat 500. Their journey started in Milan and led through Nuremberg, Berlin and Copenhagen and ended at the North Cape. They also took some time to stop in Biburg and visited us.

This is a short report of our Italian visitors (translated from Italian):

"Nine o'clock in the morning, 3rd august 2009: Thomas and Luzia are welcomed by the group. After a short check-up of the cars the tour continues. Next stop is the Axel Gerstl Company near Munich to visit Axel, one of the sponsors of the tour and spare parts retailer for Fiat 500 and Fiat 126. When they arrive, Axel - who doesn't know anyone of them up to now - offers our friends a cup of coffee or better said the german version of a coffee: a brown brew ;-)) That's when Guilia, Marcella and all others notice what they forgot in Italy: a Neapolitan Barista with its best Moka. They swear never to drive without it again!

Enough joking, Axel wants to show our friends his true love: a totaly restored 500 R Abarth (*). But there is hardly the time for photos due to the long route. So the travelers give Axel the official Fiat 500 Club Italia banner (photo to the right) and he gives them six t-shirts of his collection in exchange. After that the convoy is heading to Nuremberg. On their way they stopp at a resting place and notice that the toilets are quite different in Germany: they are turning to disinfect automatically. There are always new things to discover! In the evening the group arrives in Nuremburg just in time. After a great portion of "Spätzle" with meat and mushrooms in a nice pension there is nothing better than a night of sleep before the next day's journey." 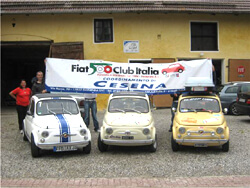