The Fiat-Story began in 1899, when Giovanni Agnelli founded the company in Turin. Next to automobiles, aircraft and utility-vehicles were soon added to the production-list of this forward-looking company. 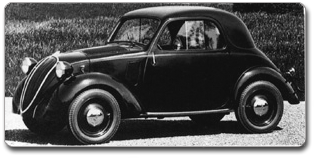 In 1919, the Fiat type 501 Balilla showed up on the road with quite a large number for that time. In 1936, the Fiat 500 A, which became known as the Topolino, caused a stir as the first runabout ever built. Even Walt Disney fell in love with the "Topolino A", and made it Mick­ey Mouse's car. The Topolino B model followed, and finally, in 1949 the C-model, with a more modern body, but the same technology.

A whole new type was the Fiat 500 Nuova, smaller than it's predecessor, but with enough room for four people, which was the beginning of the Fiat 500's success. 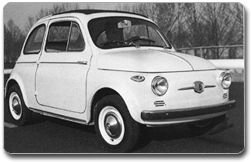 The introduction of the Fiat 500 Nuova (500 N) in May of 1957 was the dawn of a new era in the history of the Fiat runabouts. This model distinguished itself as a city-car, and became very popular amongst the ladies due to it's small size and low petrol consumption. It also had technical, as well as special advantages due to the fact that the engine was now installed in the back of the car. As this engine, which only provided 13 horse-powers, was considered too weak by many contemporaries, the Fiat 500 Sport with closed roof and a proud performance of 21.5 horse-powers was made available to more sporty drivers. The Austrian friends of automobiles were offered the Steyr-Puch, a beautiful car which was built in Graz and began with a 19 horse-power engine. Of course, families were not neglected. The range of models was supplemented with the Fiat 500 D-Giardiniera.

The engine was mounted below the rear floor, which offered room for more than just hand luggage. Very soon, most of these models were worn out as the workhorses of small companies. The D-Giardiniera was followed by the later version with better performance: the F-Giardiniera. After 1972, the station-wagon was licensed by Autobianchi, who continued producing the "Panoramica" until 1977.

The direct successor of the Fiat 500 Nuova was the Fiat 500 D, which was in production between 1960 and 1965. The D-model had a shorter sun-roof and larger tail-lights, roll-up windows and a standard 17.5 horse-powers, allowing it to reach maximum speeds of about 100 kmph. These improvements made sales rise, thus 640 thousand models of this type had been produced by 1965.

In 1972, Fiat began producing the last model in the Fiat 500 vintage car range: the Fiat 500 R. This model was equipped with a 594 ccm engine (23 horse-powers). Despite the more modern technology, which was in part taken from the Fiat 126 (which was sold during the same period), sales declined. The french competitors, such as the Renault 4 or Citroen's 2 CV, but also the Fiat 126 itself made the production of the Fiat 500 R end in August 1975, only three years after it was introduced. Thus ended the long and successful era of the Fiat 500, which we gladly keep in our memories until today.